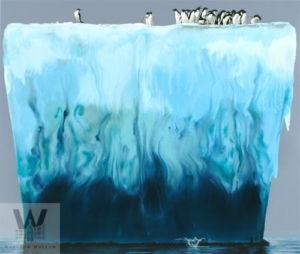 What better way to launch the Whatcom Museum’s blog than to feature a fabulous artwork featured in our upcoming exhibition, Vanishing Ice: Alpine and Polar Landscapes in Art, by an artist currently in the national limelight?

Alexis Rockman, who painted Adelies, was commissioned by film director Ang Lee to contribute imagery for Life of Pi. The artist’s sketches for the newly-released movie inspired a dream sequence experienced by the hero and his tiger companion during a spiritual voyage of discovery. See the New York Times Magazine article here.

Rockman’s fantasy-like paintings are based on actual expeditions. His portrait of Adelies penguins emerged from a 12-day trip Antarctic adventure on board a Lindblad Expedition Cruise ship. The artist explored the landscape and got up close and personal with wildlife in kayaks and zodiacs. Enchanted by the ice that glowed “luminous like jewelry,” Rockman creates a towering blue ice cube, the feeding platform for the penguins featured in Adelies. They appear to drift in isolation without sight of the mainland.

The idea for the painting was based, in the artist’s words, on ideas of “fragmentation and scarcity.” * Although not intentionally referenced, the painting calls to mind the massive ice shelves that have dramatically broken off from the continent due to warming oceans. Recognizing that these unique creatures are threatened by climate change, the artist devises an unusual composition to suggest their precarious status.* (The Adelies population surrounding nearby Anvers Island has declined by 85% in the last 35 years and could face regional extinction within the next decade. Warming oceans have shrunk the population of krill upon which the penguins and other life depend. ”

Born and raised in New York City, Rockman frequented the American Museum of Natural History where he studied the renowned painted diorama displays. He was also attracted to the Hudson River School landscape painters at the Metropolitan Museum of Art, which nurtured his sense of the sublime. Although engaged in field observations and drawings, he does not consider his work “scientific.” Instead, he aims to make “art about the history of science.”

* (All quotes from an interview with the artist in September 2012.)